Hello to all our Blogosphere friends!  We know it's been FOREVER since we last blogged, but we are back now.  Well, kind of.  We won't be blogging here anymore, but you CAN come visit us HERE.

And we're just getting started over there, but we sure hope you'll stop by and see us sometime.

To everything there is a season ...

It has been some time since we have posted ... and this has been due to a few different factors, but basically it comes down to a combination of being really busy, a little bit (maybe more than a little) lazy, and just generally uninspired.  So much so that I haven't even touched my camera in about two months.  I think I was getting frustrated, feeling that I wasn't making much progress, and just sort of quit trying.  I hope that will change, because taking pictures is something I really enjoy doing, and the good news is that even though I know I have a long way to go, I do at least have a handful of pictures of each of my companion animals that I truly treasure, and that I feel capture the essence of who they are as much as any still image ever could.  I am going out of town for the weekend to visit family and friends, and am taking my camera, so hopefully I'll feel inspired to pick it up, and maybe get a few good shots.

Even though I haven't been blogging myself, though, I have been keeping up, at least sporadically, with most of your blogs, and just like "real life" there have been many times I have celebrated your joys and victories right along with you, and even raised a glass of wine to toast those of you who won't be toasting with anything but sparkling cider for awhile ... say about nine months ... while also shedding some tears, when news of the passing of a few of the Blogosphere's brightest stars reached me.

In any case, as the saying goes, to everything there is a season, and as I had alluded to a few months back, I am beginning to feel like my blogging days, or at least this particular blog, might be coming to a close.  It may be that I'll stop blogging altogether, or maybe I'll just reinvent things a little.  I still haven't really decided, but I will let you know when I do.

Meanwhile, I'd like to reassure those who have emailed me to ask how things are going/how we are, that we are all fine.  A few highlights:

Tucker turned ten years old in February.  About three weeks ago, he came in limping from a romp in the yard, and had it not been after hours I probably would have taken him to the vet right then, but as it was I decided to just wait and see, and by the next morning, although he was doing so gingerly, he was bearing weight, so I decided to wait a little longer.  By the following evening, he seemed to be completely fine, and has remained so.  He's still the best dog ever, in case anyone was wondering.

Olivia will be turning nine years old in April.  She is still the reigning queen of Chez Tucker, and even though by rights since I pay the bills, I should wear the crown, I let her have it.  After all, she wears it so well.

Tanner will be seven years old in early May, and is still fourteen muscular pounds of the handsomest, sweetest, most lovable man-cat I have ever had the pleasure to know.  As most of you know, he had a bit of a scare back in December where he had a partial urinary blockage, but he's had two checkups since then, and all seems to be well.

Phoebe celebrated her 5th Gotcha Day in late February. For her present, she made me promise to sneak her in to a late night showing of Oz the Great and Powerful. I have not yet done so.

Finn turned three years old in January. For a cat who I thought would have a very slim chance of making it to the six month mark with as initially sick as he was and as determined to risk his own neck pulling stupid stunts, he's not only survived, but has transformed into a stunningly beautiful adult cat.  His temperament is, as it has been from kitten-hood, mercurial ... he can go from saccharine sweet to super brat in a nanosecond, but I sure do love him.

Murray the Betta fish was recently upgraded from a 2.5 gallon to a 5 gallon tank, and when that upgrade occurred he also got two very temporary tank-mates in the form of two African Dwarf frogs.  I got the frogs because I was told they were non-aggressive and would live in harmony with a single Betta.  This turned out to not be exactly true.  On the second day of cohabitation, one of the frogs (their names were Maude and Muriel, but I'm not sure which one was which, frankly) latched on to Murray's tail.  He was not pleased.  After a week of careful observation, I decided the best thing to do was to remove the frogs, and they are now living elsewhere.  I kind of hated to give them up, but I didn't have any more room at the office for another tank, and I didn't really want to bring them home.  If you don't know what African Dwarf frogs are, Google them and see if you can find some video on YouTube.  You wouldn't (at least I didn't) think frogs would be that cute, but these little frogs (they are about half an inch or so in length) were cute as the dickens, and when they'd get hungry, they would come to the front of the tank and just sort of hang there vertically with their little webbed feet dangling down and this look on their little froggy faces that essentially meant "hey, lady, how about tossing in some of those frozen blood worms right quick?"  In any event, they're living their froggy lives elsewhere, and Murray is now the king of his own tank again, and is much happier.

And that, my friends, is all for now. Have a wonderful weekend!

Yesterday was a sad day for us here at Tucker Tells All, when the news came of our buddy Remington's passing.

I don't think there are too many of you out there in the Blogosphere who didn't know Remington ... but if you did not get the chance to know him, you can visit his blog HERE

His humans Mike & Beth loved him very much, and he loved them, and pretty much everyone else, too, it seemed like.  He was on this earth only four short years, but he sure made them count. He had lots of adventures, made countless friends, and embodied the philosophy of living life to the fullest and making it count.

Just looking at a picture of the big guy could make you smile, as he himself always seemed to be smiling.  To say his passing leaves a tremendous void, and that he will be greatly missed seems terribly inadequate, but sometimes words just aren't enough to say all you want or need to say.

So I think we'll just let Ann's beautiful artwork speak for itself: 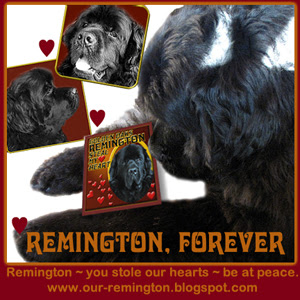 Last Friday, the 18th, was Finn's 3rd birthday.  As with all of my animal companions, this "birthday" was a made up date, a date I assigned by taking the vet's best approximation of his age when I got him, and working backward from there.  It's probably not all that accurate, but it's as close as I can get, and while it may seem silly to a lot of people (though not, I would guess, to anyone reading this blog), it's important to me to mark these dates, to keep track of the passage of days, of years, and to celebrate and honor the tremendous amount of joy and love these special animals bring to my life.

And so, last week, as I was kissing Finn on his little black nose, and wishing him a Happy Birthday, I couldn't help but think what a beautiful (er, handsome) specimen of a feline he has turned out to be.

See what I mean? 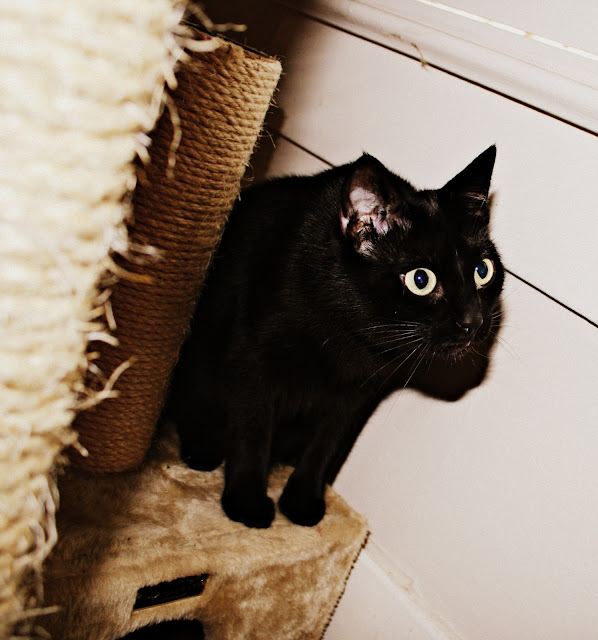 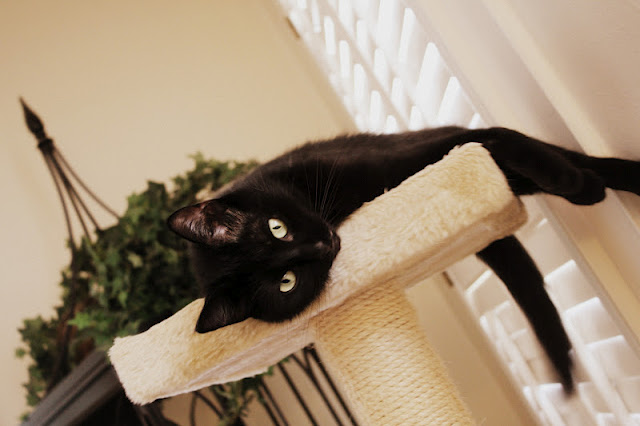 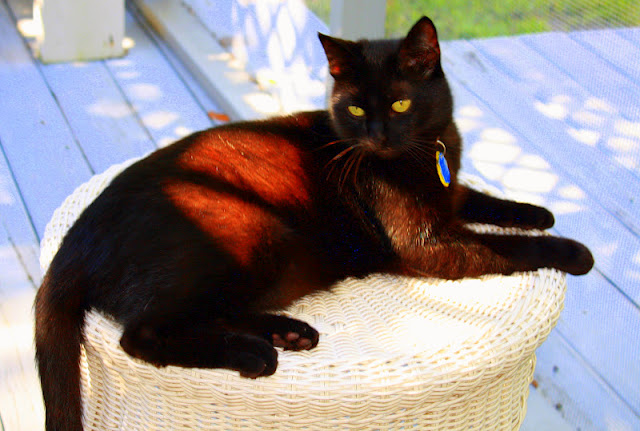 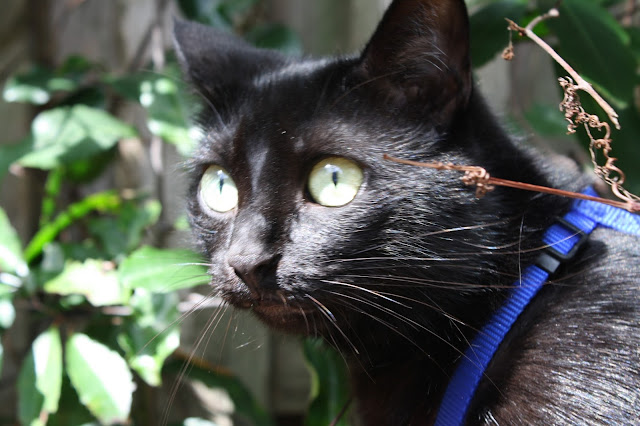 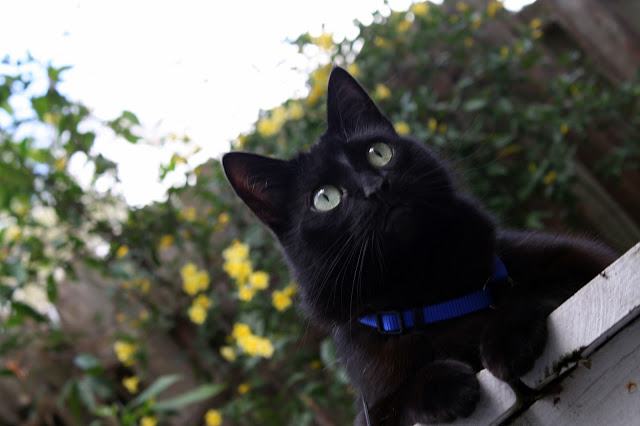 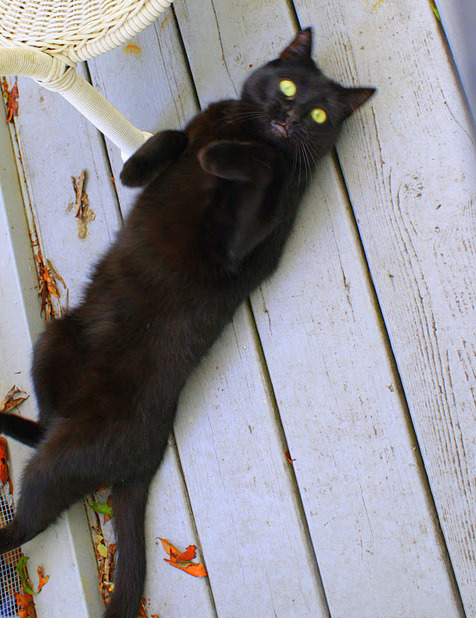 He didn't start out that way, though.  He was the saddest, sickliest, most emaciated little thing I had ever seen, and I remember fearing that he would literally starve to death before I could trap him and get him to the vet.  It was a huge victory to get him successfully trapped in a Hav-A-Heart trap and to the vet, and of course to make sure he had plenty of nutritious food, but even after that, he struggled.  He was the very definition of feral, and it was close to a week before I could walk into the bathroom that was his isolation room and not have him be so terrified that he would quite literally climb the walls.  He had a terrible respiratory infection as well, that, even after several rounds of antibiotics, continued to linger, to the point that at one point our vet Dr. G. suspected a chest mass or some sort of anatomical anomaly rather than lingering infection, and recommended that his X-rays, which seemed to be clear, be evaluated by a specialist.  They were deemed normal, but for many months he was, while not exactly sick, not really well either.  He had nothing contagious, but he just didn't thrive, and despite his voracious appetite and several wormings, he could never gain weight and always looked scrawny and ill-fed.

Around his first birthday, though, he started to turn around, and now, at three years old or thereabouts, he is healthy, vigorous and, in my opinion anyway, quite a looker to boot.  His once dull and lifeless coat is plush and glossy, with the sheen of well-polished patent leather shoes.  Sometimes I swear I could see my own reflection in his fur.  He's also an incredibly sweet and affectionate cat, with quite the entertaining personality.  He has an opinion about everything, and isn't afraid to voice it ... he "talks" more than any cat I've ever known, even Olivia, who is plenty "talkative" her own self. 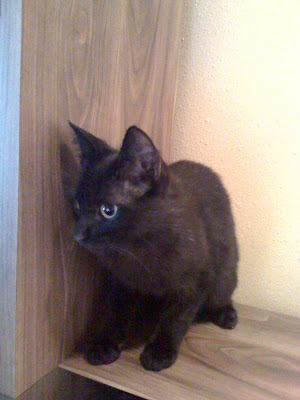 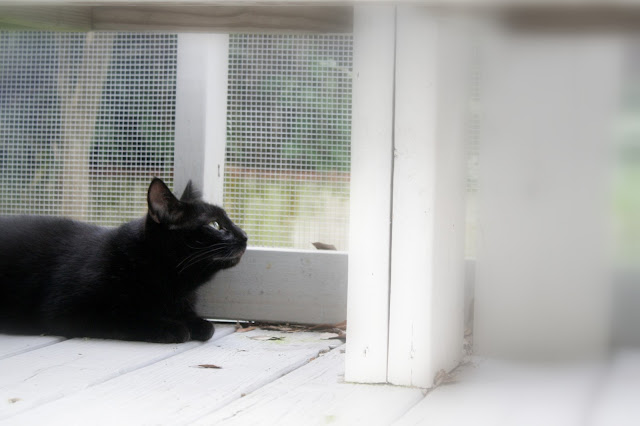 I've never made it a secret that three cats was not in my master plan.  Even-number-lover that I am, two dogs and two cats suited me just fine.  But try as I did to find him another home, it soon became clear that Finn was not going anywhere but home with me, where he has apparently made it his mission in life to prove to me that sometimes the gifts you didn't even know you wanted are the most precious of all. 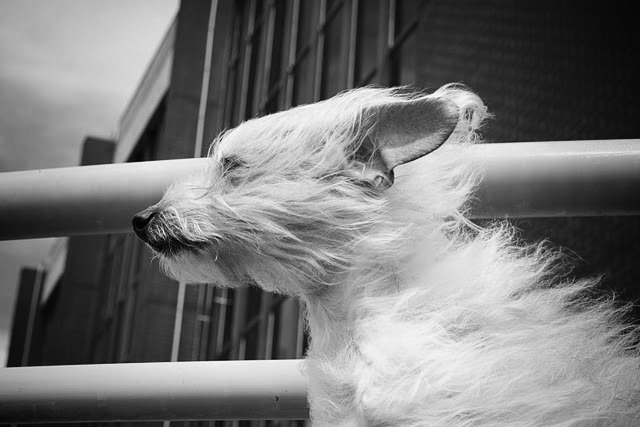 Thanks to You Did What With Your Weiner, My Life In Blog Years, and Dachsund Nola for hosting this hop! 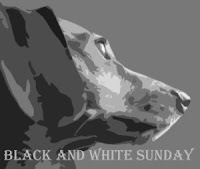